I just saw on David Marshall's amazon.com blog page, located here, where he mentions me and my review of his book.

As usual, Marshall doesn't defend his book; only claims that people misrepresent what he says, and how people don't really read it. He claims that I have personally attacked him (I'm assuming since he named me personally, he is referring to my review as well) in my review. I do no such thing. You can go read my review here to see for yourself. I do make fun of him at times, but I am honest, and I say what I think. I don't just use personal attacks. I never do. If I think someone is ignorant, I will say so, but also say why. That is not a personal attack. That's just stating the obvious!

Edit: I should say that since this post I have written my final (2ed) draft of my refutation of Marshall's book and in it, I do use some vulgar language in this updated review. But did no such thing in the original. The third draft of my review does have some language in it, however I’ve since written an edited (and final) version that includes more arguments and I edited out the language.

I did my best to make sure I had sources for my information and last I checked they are all working. I submitted my review at Richard Dawkins' website for people to point out any errors I might of made or any other advice on something I may have missed, and I got stellar reviews of it.

Marshall's only disappointed that I trashed his book and is trying to reclaim his credibility, because I pointed out many errors of his. I debated him some at amazon.com, but he could not give me one good argument for why I was wrong; he only used the logical fallacy of an argument from authority, saying that because some evolutionist supposedly said his statement was accurate he was correct in his statement, but that doesn't make it so. He must have facts, but he didn't bring up any. We didn't even get to the other problems with his review, like his taking out of context some of the things Richard Dawkins says in his book, The god Delusion, several times.

I expose this, and several other errors in Marshall's pitiful book.


Here is the screenshot of Marshall's silly little whining session: 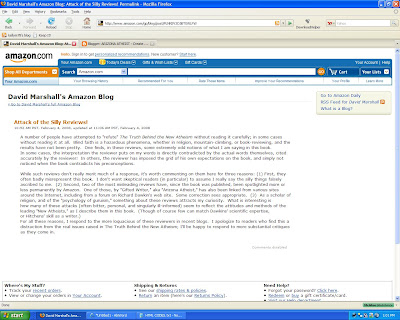 One last observation about my "debate" with Marshall. One other person was going back and forth with me who went by the name of J.R. This person hadn't even read the book, and he was trying to tell me how wrong I was! I couldn't believe it. The funny thing was, this guy was pretty much doing Marshall's debating for him. Marshall pretty much just stood behind this guy saying things like, (and I'm paraphrasing here)'Yeah you should listen to J.R.; you don't know what you're talking about. He hasn't even read the book, and understands my arguments better then you.' Pure bullshit. What''s wrong Marshall? Can't fight your own battles?

I still hope he comes to my blog to properly point out why I'm wrong on each of my points. With all of his talk, you'd think he would be more willing to try and refute me, point by point, but he doesn't. I see this as intellectual cowardice at its finest here!

Well, a few days ago I went to amazon.com and saw that Marshall did reply to a few things in my review, though I can hardly call it a rebuttal. He made some of the most redundant points, which he wasn't even correct on in the first place! I rebut his absurd arguments in a newer post called David Marshall's Attempted Rebuttals.

I figured I'd go ahead and point out an error that "J.R." made in my debate with him. He had claimed that genetic drift should help change the human population, and that is a flaw of evolutionary theory. David Marshall, as I pointed out above, basically stood behind this person and said 'Yeah, yeah, see I told you that you were wrong.' Nope, sorry. J.R. was actually very wrong. I wasn't able to find any information about genetic drift at that time, but since then I have found some information at the TalkOrigins.org (I also confirmed this with a few people at Richard Dawkins' evolution forum on his site) website that stated that genetic drift can have a dramatic effect upon small populations, but very little, if any, on large ones. The human population is anything but small. So, it would seem that not only was Marshall proved wrong (he wasn't even able to defend his position!) but his foolish defender was also. Well, that's what you get when you leave a theist (I read posts by J.R. at amazon.com stating that he had degrees in theology but none, if I recall, in biology) to do a scientist's job!

Well, I was browsing these old posts and clicked on the link to David Marshall's Amazon.com blog and found that a few weeks later he edited his post to exclude any mention of me so no one can check out the truthfulness (and his distortion) of some of the critiques he mentions of mine. I wonder why...

Perhaps he doesn't want to draw any attention to them so people won't come to my blog to read my devastating arguments against his case? Who knows...

Below is a screenshot of the current page taken today. 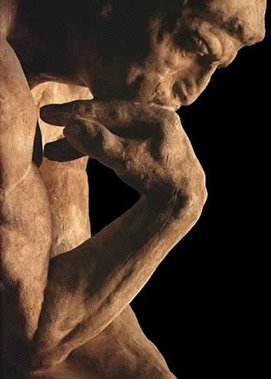